Let's face it - this isn't the only jewellery site that'll try to tell you how "significant MY designs are". And how "I can inspire a much deeper sentiment" in you with what I create (as opposed to another designer)...

My guess is that even before you got here today, you probably admired a few other artists' creations. Heck - I fall down THAT "rabbit hole" rather regularly (Pinterest being my worst sirens' call).

The fact is - jewellery has been the source of meaning, sentiment, beauty and status signals since day one.

Its history and evolution is fascinating, full of surprises, drama and a poop ton of money and fighting (well - and a bit of lying and deception too).

As an industry - jewellery is also behind some of the most potently-effective and long-lasting marketing stunts. Simply praying on our emotional gullibility. Our need to be loved, liked, admired, coveted...

If you think that an engagement ring has a sentimental meaning, and is an expression of true love and everlasting commitment (the intent of), you'd be disappointed to learn that that "myth" originated in the marketing department of the largest diamond mining company in the world.

Yes - that romantic gesture, was re-invented because De Beers just needed a way to make us buy more diamonds (because they were acquiring more than they could sell).

And at the risk of defacing another "sacred cow" - those stones you might have chosen as your birthstones and assigned a special significance and powers to, that concept was birthed by the desperate need of the industry to shift the gems that weren't selling.

So they assigned them Super Powers. Paired them up with a month in the calendar, and proceeded to tell you one of the sweetest white lies you'll be believing even IF you saw evidence to the contrary.

The bottom line is that jewellery will ALWAYS have meaning! And because we (humans) love beautiful things, and we can't exist without meaning, that's never going to change.

But the shift I'd like to create for you here, is that you don't just let jewellery's meaning "happen to you".

Instead, let it inspire the way you want to show up in the world.

Occasionally, pick a piece that you love and assign it your own Super Powers. The ones YOU, proactively want to embody, experience and impact on your environment.

Let it focus you on the way YOU decide you want to feel.

You've felt this before.

It works both ways: every time you wear that ring, you feel like you're the Queen of the night. You know that other women are looking at it longingly. And you sense the men at the party are... well... thinking whatever it is that men think :o)

All I'm proposing is that you let jewellery be your Totem.

You choose it. It chooses you. It empowers and inspires and helps you show up the way you want to show up.

Its message can be discreet. For your eyes only.

...and will come to you naturally.
You just need to lead with intention.

Frankly - whether you choose a Totem of mine, or use one you already have - the power is still there. And I'd love for you to use it to empower YOU, or to nurture you, or inspire you.

2. Then pick a Totem (in TLT language = a jewellery piece).

3. And now - decide that every time you wear this Totem, you're non-negotiably bound or under the spell of its assigned (by you) super-power/s.

4. You just need to reinforce that meaning a couple of more times mechanically, and soon your mind will almost magically follow on auto-pilot.

I have a tiny Totem I made for myself...

...it's actually one of my Signature Totems. A pinkie ring with a Gold Rutilated Quartz. It's a clear stone, with sun-like gold strands suspended inside it. 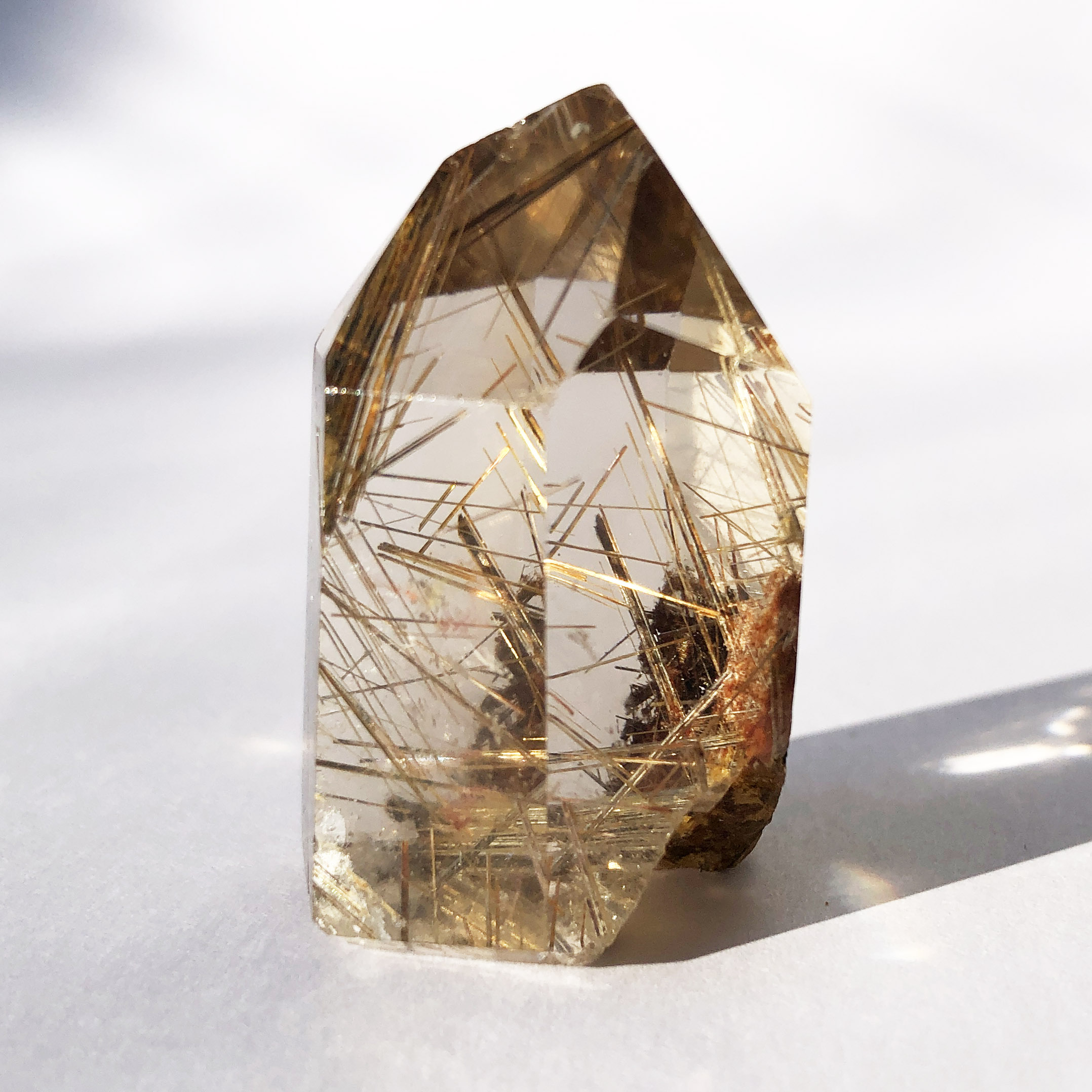 To me it's mesmerising. Like the Sun. The Sun to me is the ultimate Creator body on our planet. So - naturally (to me) - each time I want to be creative, I put on my Create Totem and I know I now intend to create! 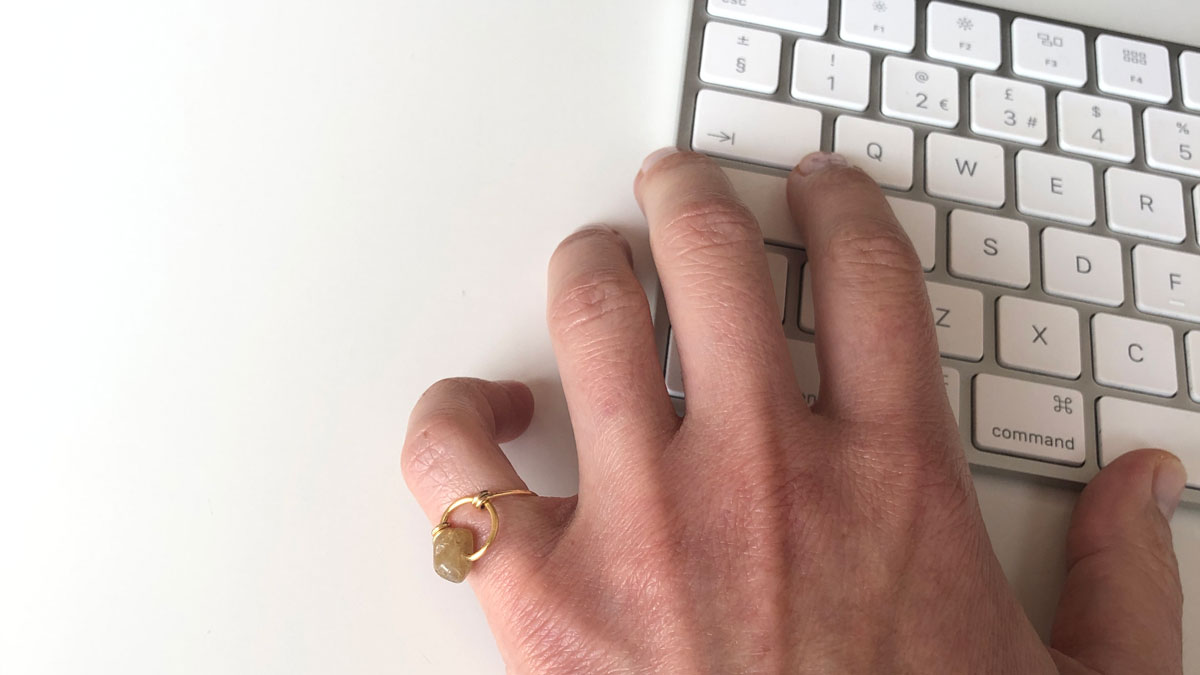 I have another pinkie ring (yeah - big surprise ;o).

It has a tiny 2mm fresh water pearl dangling off a simple silver band.

If I intend to be present when in a conversation with someone, I wear that. Because its pearl is a symbol of purity, gentleness, openness. As it dangles when my hands move, I am instantly reminded to come back to the conversation...

For you it will be a different stone, or shape, or movement.

But the effect will be the same. Having a trigger, a reminder, or an anchor for the state of mind we want to embody.

That's the reason why I started Tiny Little Totems. That and a little selfishly, because of how creating the Totems makes me feel.

It turns out this was my "calling" all along.

Jewellery - as it happens - found me!

And now - hopefully it found you :o)

Have a look around my shop. Maybe you'll like what you see. But even if you don't, don't let the method be wasted. Try it with another Totem.

Go on - let your jewellery inspire the state of mind you desire.

P.S. Tiny Little Totems (TLT) is from my heart, but not about me. But in case you're interested in the person behind the scenes, here's a small version of my journey.